Dental hygiene is a major concern for new parents. They are often not well informed in dental health and can pass on bad habits to their children. The children’s eating habits vastly differ from adults and are more prone to dental problems. To add to this problem, parents are busy and do have time to supervise brushing all the time.

We developed BrushyBuddy to tackle this problem. It is built on the principles of ubiquitous design and is very easy to use and learn for children. The product was thoroughly researched, tested and built using sensors and micro-controllers.

Learning by seeing was found to be the most effective way as compared to other modalities such as game, music, video or vibration. Since parents are too busy, they cannot monitor how the children are brushing. The mascot helps in this case.

Mistakes will be made, and then rectified

We don’t expect children to brush their teeth perfectly. They might not be through or even fail to follow instructions. The sensors on the brush record the brush movement to recognize the brush strokes, and the mascot gives immediate feedback and further instructions. The data is also sent to a companion app for parents too look and take corrective measures. 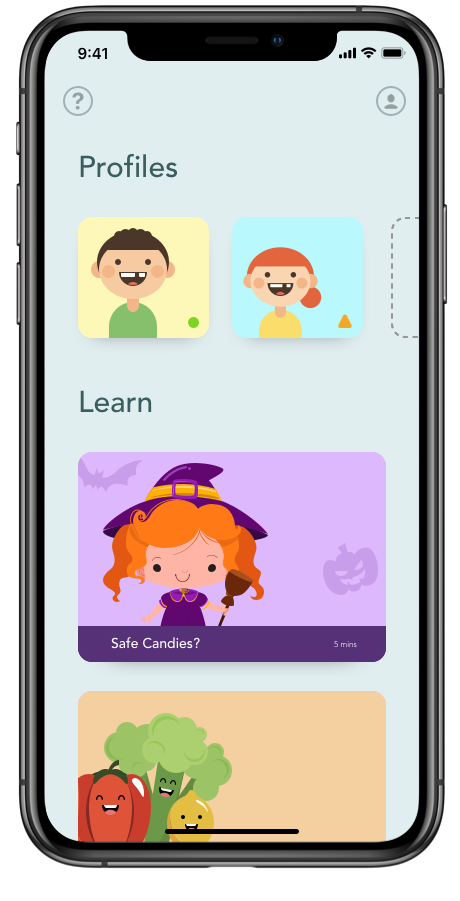 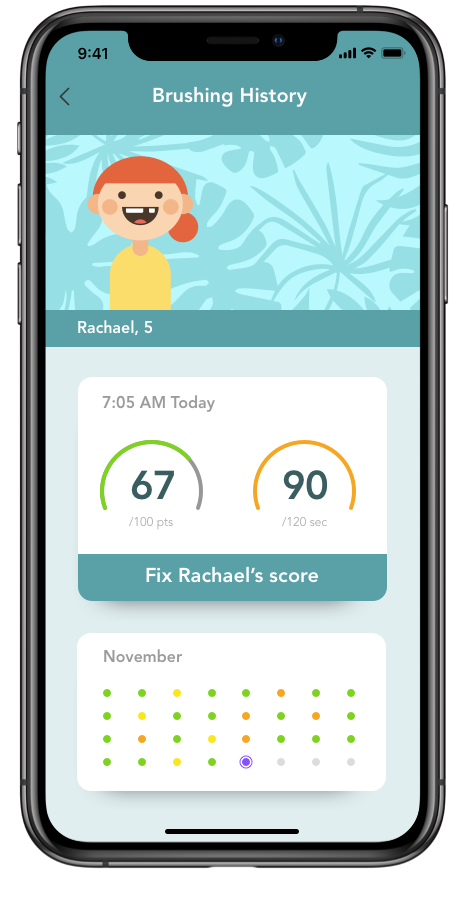 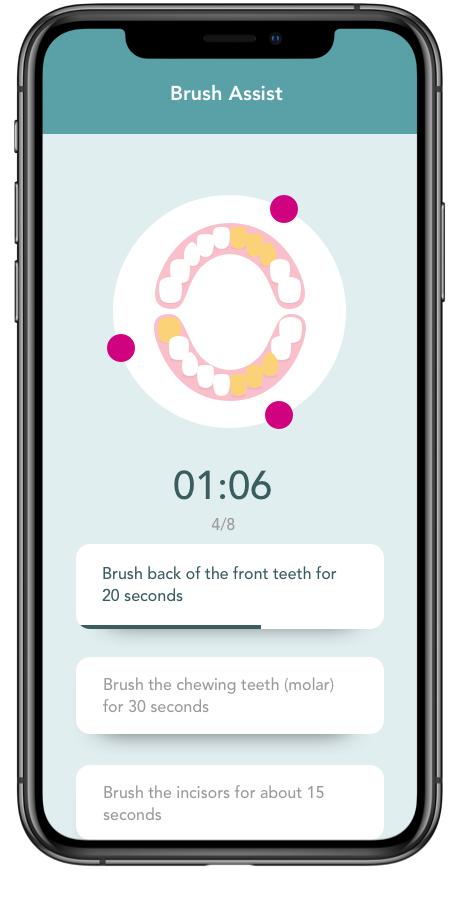 Parents can use a companion app to look at their children’s dental health at a glance. The app informs them if a particular region in the mouth needs more attention. It also tells them how to cover the missed spots.

A reporting tool to assure parents 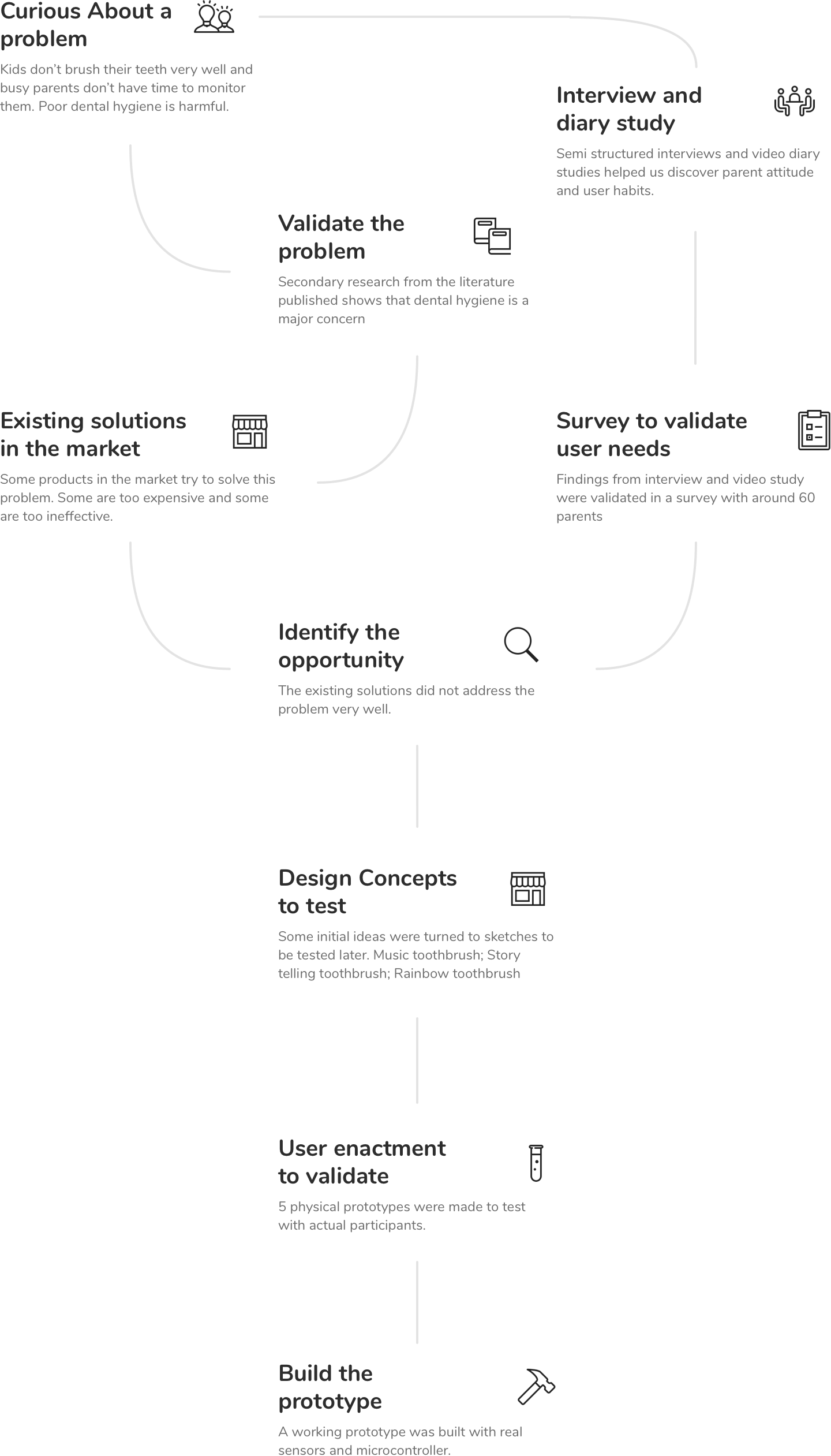 Children's Dental wellbeing is a major concern among parents. During a recent casual conversation among parents about their kids, I heard statements like:

My group and I concurred that this is a challenging problem statement and we started with some exploratory interviews to get a better sense of the problem.

To understand the children’s behavior towards brushing, we conducted video diary studies. Parents were asked to record a video of their children at home brushing their teeth. We found that

Children feel excited about the process: such as filling the cup with tap water, squeezing toothpaste from the tube and stirring the water to wash the brush.

Children could not brush properly: some kids suck toothpaste off the brush, some brush teeth horizontally and press hard. Parents are concerned about these habits.

Children could not brush thoroughly: usually neglected areas include biting surfaces of the back teeth and back of the front teeth.

Based on our findings, we sketched some initial ideas to address this issue.

The concepts developed in the previous step were too broad. Based on feedback from peers, we decided to conduct additional research to narrow our scope. A survey was conducted, and data from 55 responses were analyzed. The findings validated the interview findings.

Putting the concepts to test

Based on the survey, interview and video diary study we realized that the following factors could affect the design of the product.

Involvement of parents. We want to know how the participation of parents affect the children and parent’s peace of mind.

Story, music or game. Different means can be adopted to develop an interest in the rather monotonous activity of brushing. This is necessary to prolong the brushing activity to 2 minutes.

Device type: toothbrush / mirror / toothbrush holder. The team presented different arguments for and against each type of device.

We created a matrix to select from the combination of all the above factors and picked 5 prototypes to test with the participants. We made paper prototypes and prepared scripts for this. Following questions can help us judge the success of the chosen prototype:

How might we encourage children to brush teeth for enough time?

How might we help children to brush teeth thoroughly?

How might we help parents to supervise children’s tooth brushing behavior? 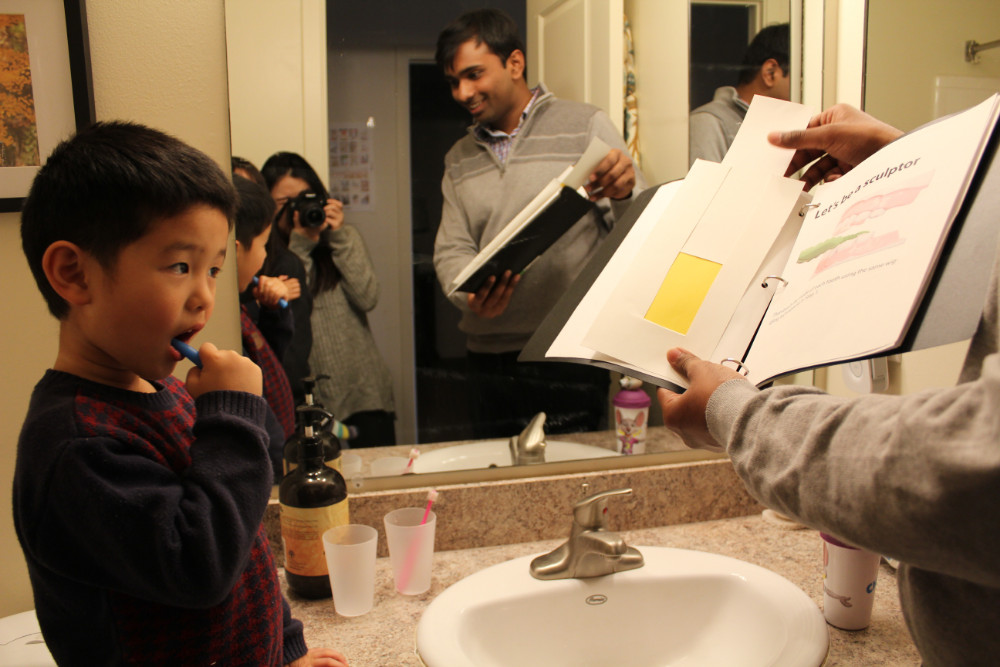 The user was introduced to the story and was shown a picture of the part of the mouth to brush. As they brushed their teeth, the progress bar was moved to indicate the completion percentage. After each segment, the user was shown the next part of the story and a new region in the mouth to brush their teeth. The story was divided into six segments to cover all the sections of the mouth.

Cons: User could get distracted from brushing. It also adds to the time taken for the process. 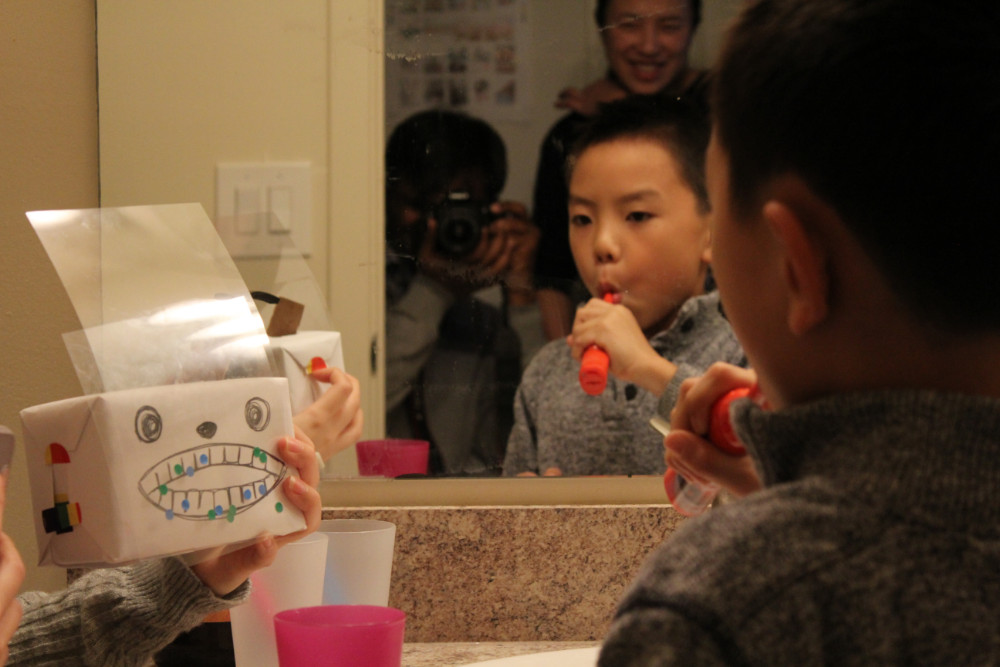 The scenario involves one participant in the role of the kid without parents’ presence. It is now in the morning, and the kid goes to the bathroom to brush his/her teeth. As the kid picks up the toothbrush from the holder, the holder will start to interact with the kid to help the kid go through the brushing process.

Cons: User is distracted from looking at the mirror. 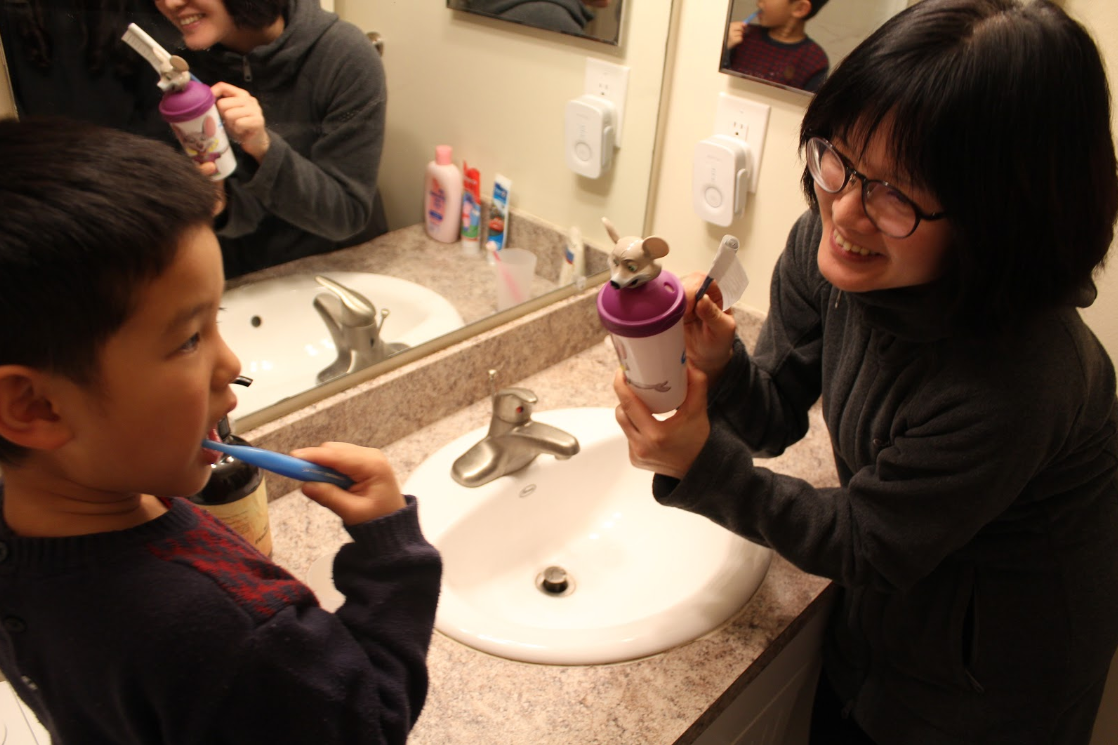 The toothbrush holder plays "teeth brushing music" with the kid’s name, to remind the user that it is time to brush teeth. The cartoon character gives verbal instructions of how to brush teeth, by singing “left, left, right, right, circle, circle, one more time…”. At the end of the two minutes, the toothbrush holder will stop the music and give the kid a sticker as a little prize. 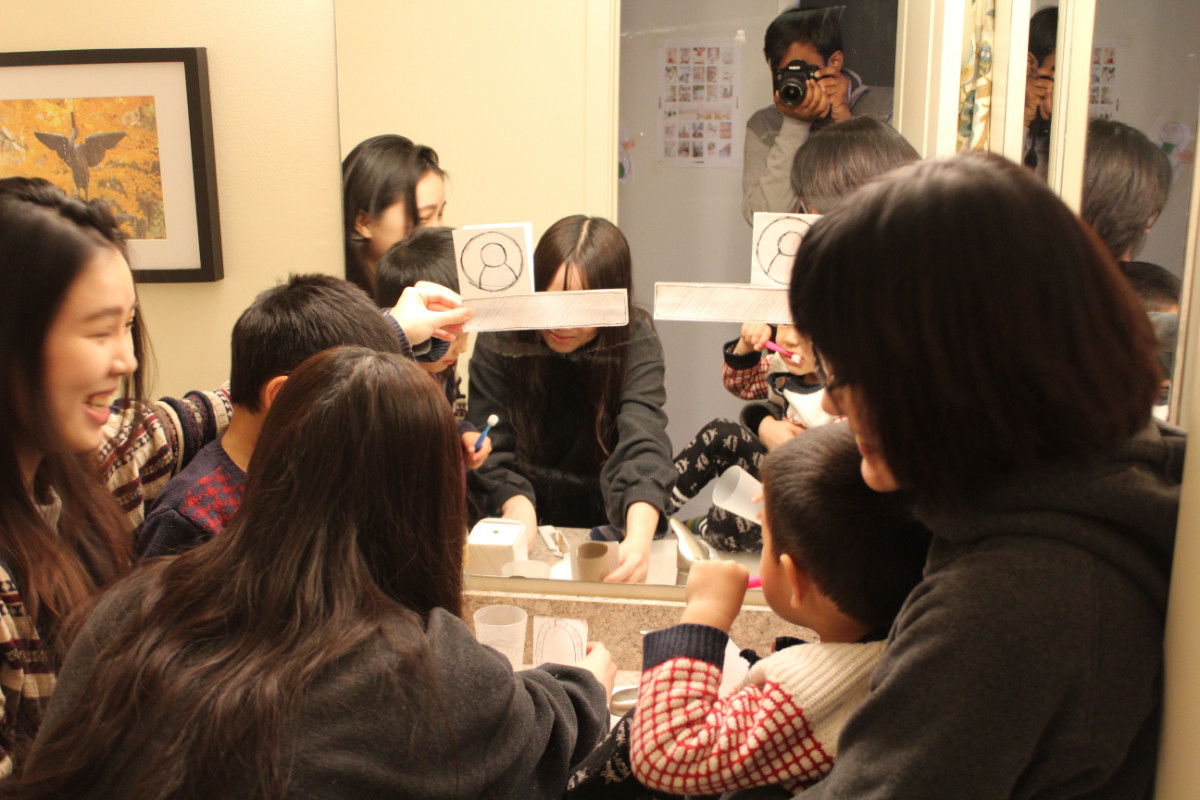 The kid will have a tooth-brushing competition with parent/sibling. The bars on the mirror shows the competition status. The lights on the toothbrush holders indicate the areas the kids need to brush. There’s a sensor in the toothbrush that can sense if the kid is brushing in the right way (circle/direction: up and down/) and if the kids thoroughly cleaned this area. If you are doing wrong, the toothbrush holder will remind the kid to brush the teeth correctly, and the competitor will exceed the kid.

Parents feel that they must teach kids how to brush their teeth. Therefore they do not want a device to replace their tutoring function entirely. However, parents do hope that some tool could be in place to help kids brush their teeth correctly when they are busy or not in a good mood (e.g., in a busy morning).

Kids (3-5) cannot be pushed too hard in learning the correct tooth brushing behavior. Based on their ability as a very young kid, they cannot do the brushing movements very quickly, and we cannot expect them to be correct all the time. This would discourage kids, and frustrate them. It would be better to focus on the long-term goal by teaching the kid gradually and step by step.

Building the smart mirror and toothbrush

Based on our findings from the user enactment, we concluded that parents should be involved in this process of educating the children and the solution should not distract the user much from the primary brushing activity.

We propose BrushyBuddy, a friendly mascot which guides the children how to brush. The mascot is displayed behind a two-way mirror so that the child is not distracted. The sensors on the brush predict the position of the brush and send the data over Bluetooth to the mascot. The mascot ensures that all the regions of the mouth are brushed well and for long enough. This data is also sent to the parents’ mobile app for them to look at the daily or weekly brushing logs.

To make the two-way mirror, I pasted a reflective coating on an acrylic sheet and put an LCD screen behind the screen. The mirror reflected perfectly when nothing was displayed on the screen and showed only the mascot when shown. 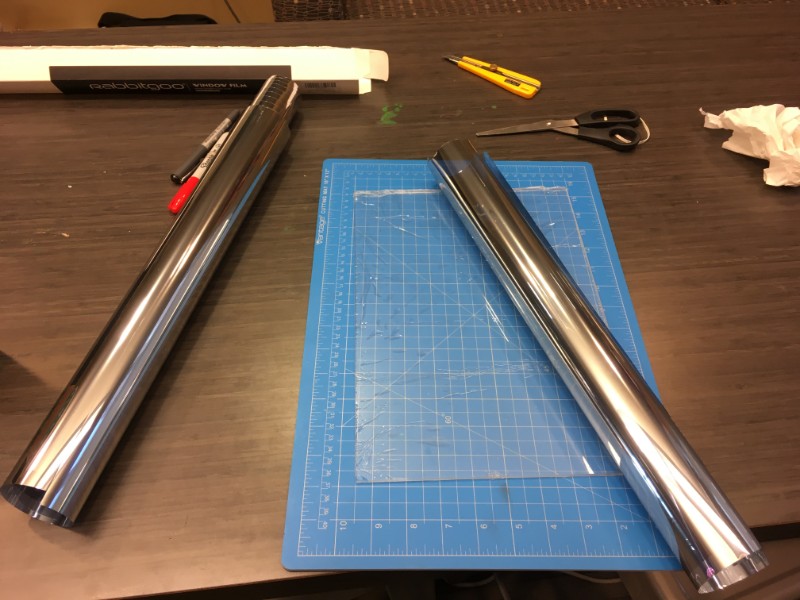 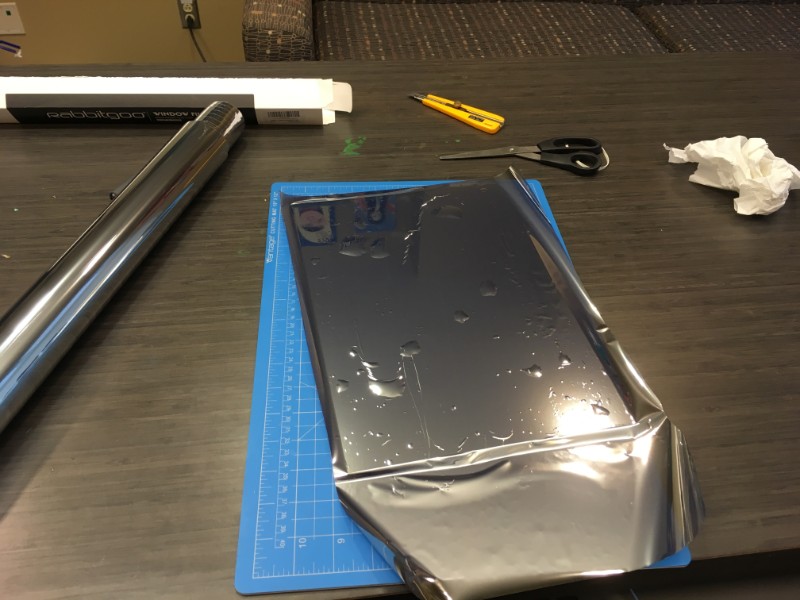 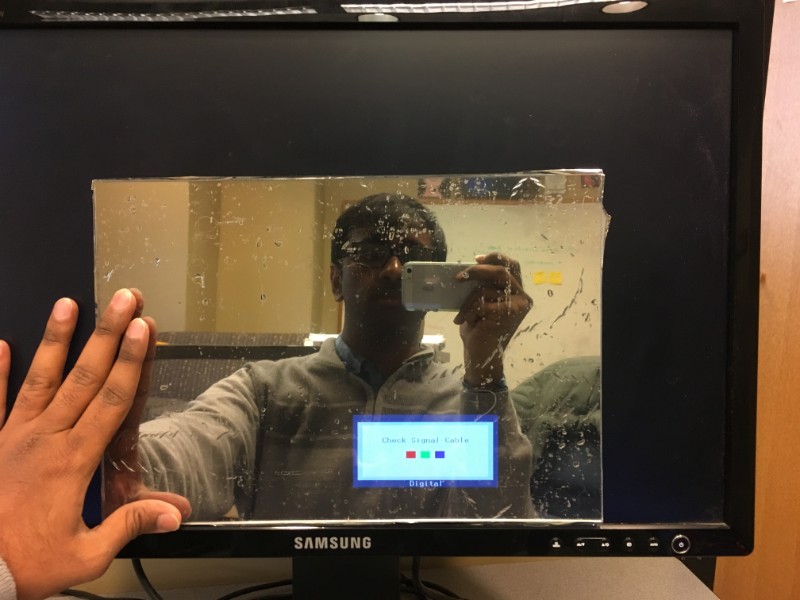 This prototype has a toothbrush fixed with an MPU6050 3 Axis Accelerometer Gyroscope Module, Arduino Nano and Bluetooth module. Since these electronic components are meant for prototyping, the form factor is quite large. The sensors can be implemented on a smaller chip as well. The monitor can be run with a Raspberry Pi. 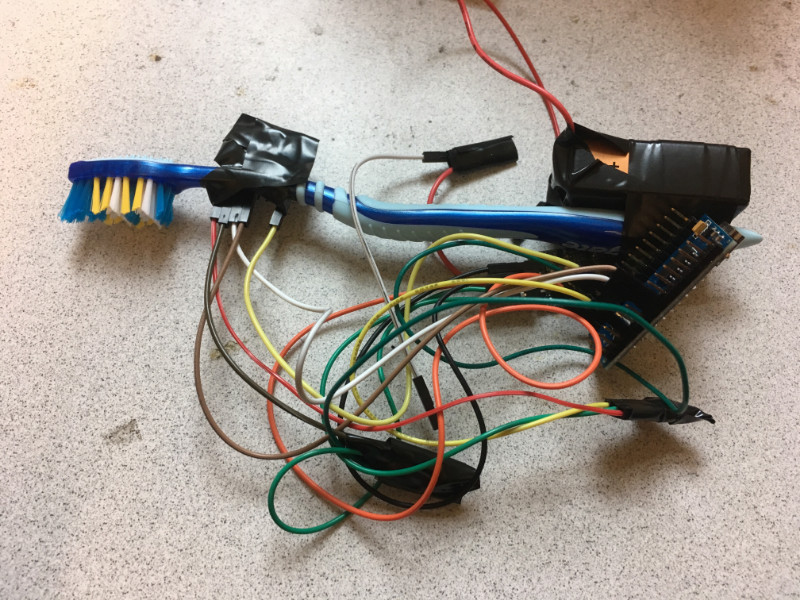 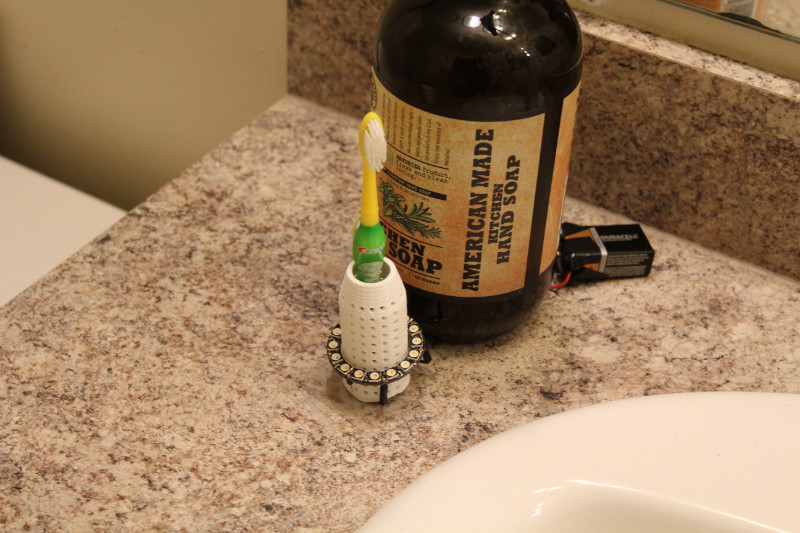 I enjoyed working on the final video for this project. This was my first attempt at videography and editing.